Injectable biologics have some of the heaviest regulations of any pharmaceutical therapy. The US Food and Drug Administration (FDA) insists that anti-contamination protocols be followed throughout the manufacturing and packaging processes, with all personnel, equipment, and manufacturing and lab environments kept completely sterile.

Compliance with good laboratory practices (GLP) and good manufacturing practices (GMP) is crucial for injectable biologic formulation. Since the active ingredients are injected directly into the patient’s tissue, there can be no doubt regarding the purity of the formulation. The FDA demands their extensive guidelines be strictly adhered to in order to prevent contamination.

Despite the difficulties associated with manufacturing biologic injectables, their efficacy makes them well worth the effort. This is borne out in the global market, where in 2015 the field was evaluated at nearly $300 billion. Even more impressive, the projected compound annual growth rate (CAGR) predicted their value would expand by close to 7 percent over the following seven years.

Producing effective, contaminant-free injectable biologics that comply with FDA guidelines can be overly burdensome for many developers. As a result, they rely on contract manufacturing organizations (CMOs), especially during the initial phases of their pipelines. Responsible developers and CMOs alike do well to pay close attention to the present state of the industry, in particular the major challenges that may complicate the manufacturing process.

Pre-formulation testing of injectable biologics is both necessary and challenging. 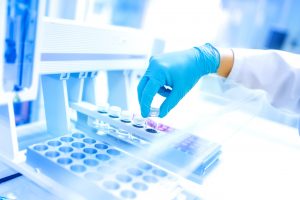 In order to safely produce the drug, a range of pre-formulation checks must be conducted long before an injectable biologic is even formulated, let alone manufactured. Fortunately, most of the the necessary data for accurate pre-formulation assessments can be collated from the research and development process of the initial active ingredient. Occasionally developers may need to invest in further research, but this is rare.

The preeminent concern is if the drug might break down, either during some stage of the manufacturing process or within the intended forumation itself. The injectable biologic must be resistant to any stressors placed on it by fluctuations in light exposure or other environmental factors. It cannot be susceptible to oxidation. As the manufacturing process can involve changes in temperature, thermal stability is of paramount importance.

If it is not possible to produce an injectable biologic that clears all these hurdles, alterations in the manufacturing pipeline can be implemented to protect against a known sensitivity or instability.

The pre-formulation process should always include an evaluation of how the biologic reacts throughout the preparation stage. Solvents and other residual chemicals sometimes remain after biologics are prepared in bulk. If so, the formulation and manufacturing process must take them into account.

At the end of the process the biologic’s solubility must be confirmed. Errors in this stage can lead to reduced bioavailability, or the active biologic component becoming compromised or degraded. 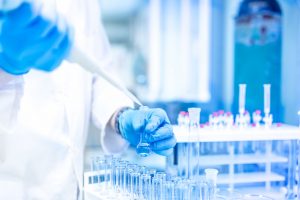 Upon completing the pre-formulation assessment, the resultant data is used to determine a set of optimal formulation conditions. Certain protocols involving oxygen control or hydrolysis might need to be instituted during various stages of the manufacturing process. Vacuums may also be necessary, depending on the formulation.

Bulking agents, buffers, and other excipients are often introduced to the formulation at this stage. FDA regulations only allow certain types of excipients for use in biologic injectables, and these vary depending on the route of administration. It is therefore necessary to determine whether the drug will be administered intravenously, intramuscularly, or via subcutaneous injection before committing to an excipient. The milligrams per milliliter concentration of the solution must also be taken into account in order to accurately administer the finished drug.

Depending on the biologic’s solubility and stability, a buffer system may be required to regulate the formulation’s pH. FDA regulations only permit the use of citrate, phosphate, succinate, and a small selection of other common buffers in biologic injectables. Each individual buffer has its own strength, which is further impacted by the concentration, and so establishing an ideal buffer system requires extreme care. It is often necessary, however, to prevent the pH from falling out of the acceptable range upon the introduction of bases or acids.

Innovative practices have improved the pipeline for manufacturing injectable biologics. 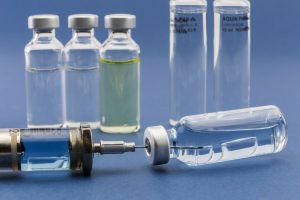 Maintaining a completely sterile environment is challenging, but advances in both technology and methods have made it possible. Personnel typically work behind glass partitions to prevent contamination, and handle the sensitive biologics using mechanical grips.

Before entering the pipeline, equipment like stopper bowls and filling needles are sterilized via irradiation, a dry-heat oven, or an autoclave. Semi-automated apparatuses such a mono-block can be used for filling, further reducing the risk of contamination that might arise if these operations were performed by hand.

The fill and finish process must take place in an aseptic or sterile environment known as a cleanroom. Every piece of equipment and workstation in the cleanroom must be been laid out to streamline a direct pipeline from filling through lyophilization to stoppering. High-efficiency particulate air (HEPA) filters are installed in the cleanroom to prevent airborne contamination.

Lyophilized injectable biologics present their own challenges. Vials must be partially stoppered and then inserted into the lyophilizer. After the freezing, primary drying, and secondary drying stages, the vials are fully stoppered. To eliminate the potential for contact with non-sterile personnel or equipment during this sensitive process, the shelves within the lyophilizer itself are mechanically lowered.

While non-sterile lyophilization is often performed with sterile nitrogen, the lyophilization of biologic injectables must be performed using methods with a lower risk of contamination, such as inert gas or under a vacuum.

Given the FDA’s strict regulations, the intense cleanroom protocols, and the demanding complexity of the pre-formulation and formulation assessments and development, many biologic developers are turning to qualified CMOs for help in pre-formulating and manufacturing biologic injectables. This collaboration often extends through clinical trials and scale-up, all the way to commercial manufacturing. By partnering together, CMOs and biologic development organizations are able to keep costs down and efficiency high at every stage of the injectable biologic formulation manufacturing pipeline.